As I sit here on the plane and reflect on my 6th year of campaigning in Europe at medieval tournaments, I ponder where to next and how shall I commit.  I am over traveling alone.  I have not the drive to do it myself any more.  Having someone with you to just talk with, assist you when confused on how things should work in an unknown place or even to decide on where to eat is an immeasurable bonus and happiness.  Then there is the question of what happens should you get hurt, who can assist you with the heavy stuff and getting to the airport or perhaps even home from the hospital?  These are the things to consider, which you might not even think of, until it is too late.

Trying to travel with armor sucks.  How do you pack? Where does it all go?  This makes things very difficult. What if you have a pole ax or halberd?  What is the length of the poles?  Can you buy a pole to put it on at the site?  Or do you get (my current usage) a snowboard bag and attach then axe head on site?  Then can you get it off, should you need to, for getting it home?  Is it now long enough to compete properly, 6.5 foot or 7 foot?  Of course, there is always the questions that occur from the airlines when you check it in!  What is this?  Sports equipment… then there is some waving of hands and attempts to explain it to them.  Of course, there is always questions, but usually they let you go.  I also pack in about 1/3 of my armor in the snowboard bag as well.  Of course, that is now two bags, so there is a cost to take it over, then one to bring it back.  So now you are looking at about a $200 extra cost for flying and returning.

Then there are the emotions.  What is the greatest about fighting is also the worse.  The highs are followed by lows to the same degree.  Expectations, anticipations and preparations, which having lead one to the tournament, build you up to a climax that is an amazing experience.  This is something that is slightly different for every person and every tournament.  It is part of the sport and I am yet unsure how to suggest one cope with it.  Ride the emotional wave and enjoy life.

Then there is the fighting.  Every tournament except Battle of the Nations (BotN) seems to be pretty lax on armor and weapons requirements.  (I’m not sure about Dynamo Cup) And weapons for that matter, although they still check those out pretty well.  The actually marshaling to address safety concerns seems to be at a fairly high level all around.  There always seems to be some kind of issue that gets raised or set of issues at and I suppose there always will be until the sport matures to a professional degree.  Something like where you check in/out your arms and/or armor or some such.  But the logistics of that is pretty significant.  They were up to the old ways of running things some.  late rule changes, odd enforcements both in the list and out of the list for registration.  There are definitely some improvements to be made, but overall it is getting better a little by a little.  My #1 suggestion to improve this is for them to schedule things more sooner and to let teams supply volunteers to join in in making some of the stuff happen.

I would say one the biggest disappointment I have seen from BotN is the lake of catering to the fans or new fans of the sport.  They price the event out of the range of average folks that want to enjoy the show.  They could have probably filled 10k+ fans into the arena in Barcelona, however, by charging 30 euro per session or half day, per person, that made it 60 euros for someone to watch just one day of action.  Yup, not many families or other coming out.  What is the right price, maybe 20 euro for the day.  In Belmonte, the price being 30 euros kept the crowd pretty low, compared to the IMCF championship where the price was like 10-20 euro for the day, which had a huge crowd.  Until this sport is completely filling arenas, we should be keeping those ticket prices good for all.

Barcelona was a wonderful city to visit, which I wish I had more time to explore.  Maybe one day I’ll return just to enjoy the city.  Walking through the gothic quarter it was easy to image what walking through Diagon Alley in Harry Potter might have felt like or perhaps walking through Waterdeep.  I’ll be back, but not sure how much I want to go to Battle of Nations again verse attending other potential tournaments, as there could be a lot of fun at smaller ones as well.  It all depends upon where my travel companions wish to go and have fun at.  Look for me in the list though as I will be there again.  I’m also leaning toward doing more singles fights too.  Hell, I’ll fight in as much as I can. 😀

This was our last PainBank episode from 2005-6 timeframe. We interviewed His Royal Majesty (at the time) Semjaka, King of Calontir.

It was enjoyable and we never intended to stop podcasting, but alas we did. Maybe one day we will get going again.

This throwback episode goes back to an interview I did with Duke Felix (Scott Frappier).

It was a great time and our friendship has only flourished since then. In the image though is Duke Edmund and Duchess Katrina.

Sprezzartura is performing everything with grace, if I recall correctly.  Per the wikipedia article: “a certain nonchalance, so as to conceal all art and make whatever one does or says appear to be without effort and almost without any thought about it”

This was a fantastic episode.  Hope you enjoy it all again.

Joseph of Newby from down under in the land of Australia. This was an enlightening and new perspective.

I attended the AMCF recognized EMP event Riddle of Steel V this past weekend near Orlando, FL.  It was a blast and quite a bit of fun.  It is a fairly unique event, which are usually the best.  Here is my review, which I started on my trip home:

As I sit here thinking on this past weekend at the Riddle of Steel, I’m recalling a similar feeling to Spain and France in 2014 and 2013.  Something magical happened.  Prague was great as well, in it’s own way.  There was a explosion of emotions and release of dopamine.  The high that is created from such intense combat is an addictive thing.   The best part of it all is being around those who I have been able to share these experiences with.  I celebrated this past weekend with many friends, old and new.  It is a celebration of life and energy.  The expression of friendship and shared interest.

Love life and enjoy the moments you have, as they are fleeting.  Gone the next moment when the mundane bleak world returns to focus.  I love living a life in harness and the trials overcome.  I hope to continue to enjoy this for many more years to come, but should it pass too soon, I will know I have enjoyed every minute for what it was worth.  Time is precious, enjoy it, don’t waste it on the negatives in life.  If you don’t like something or you want to do something, then do it.  Change your stars.

I would thank first Michelle and Tinker for opening their home and hearth to all of us.  To the many folks that helped setup/tear down of the various stuff.  You rocked.  The cooks and those that helped prep the food, it was excellent all around.  To the marshals, who enabled the fighters to have fun and not worry so much about the other parts, your time is very, very appreciated.  To all the fighters I had a chance to throw down with and those I didn’t from far and wide, laugh in the face of your enemies, crush them, drive them before you…..  To all the little things that everyone else chipped in, from the music, to the dancing, to the awesome boats, and the rest, it you who makes this fun possible.  Finally to Alex Cooley, Baldar, I say thank you for being such a Conan nut.  The Riddles continue and only Crom knows who will answer.

WOW!  Gulf Wars XV, which also has some photo links from then as well. 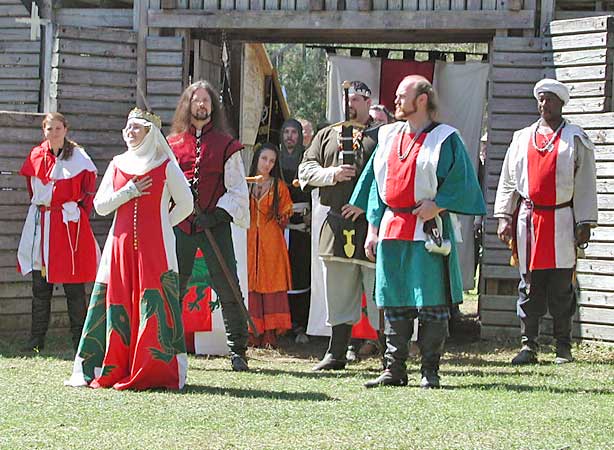 Photo Credit to: THL Barbara Sterlings  In the pic, there are some classic folks, can you spot them?

It was a long time ago and dates our show.  This was a fun time and here is our report from that time.  Enjoy:

Finally got around to updating the site.  Now there is a bit more navigation information on the side bar as well as finally showing the RSS feed again for those that want to subscribe via their favorite subscription service.  Also added a shopping system, so we now have a BotN USA Team Scarf for sale!  Please support the show and our adventures in medieval podcasting and fighting!

Throwback Thursday edition.  Here is an interview from back in the day, which was with an awesome teacher and martial artist.  At the time, he was just getting into Akido.  Enjoy!

This is an SCAevent held in Kalamazoo, MI in the winter.  It is generally a pretty good indoor melee event, but I think it was a Tournament of Chivalry this particular year with a bit of melee thrown in.  I do not recall what we talked about, but here you go.  A walk down memory lane!